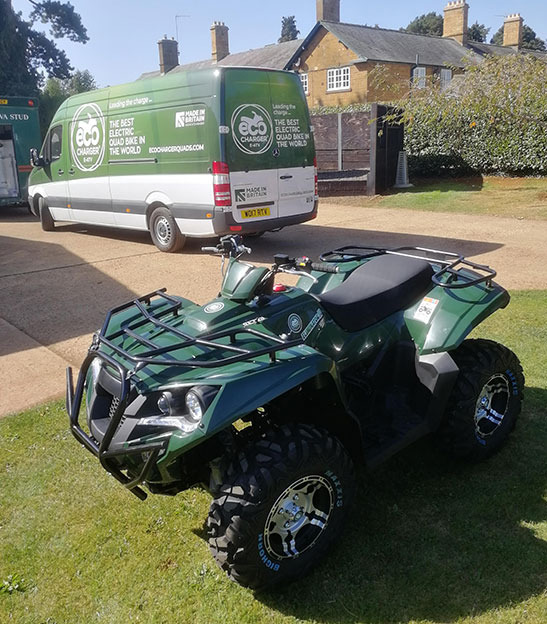 The stunning Upton Estate on the Oxfordshire / Warwickshire border comprises over 2,000 acres of pasture, woodlands and arable crops and is home to the famous Upton Viva National Hunt Stud and racing yard.

Set up by Robert Waley-Cohen, a leading figure in the horse racing world and until recently the Chairman of Cheltenham Racecourse, Upton Viva has bred multiple winners including a winner of the Topham Chase over the Grand National fences and at the Cheltenham Festival, and nine other Class 1 winners. The estate is powered by renewable energy, including a large PV array, and a 1MW biomass boiler using woodchip from its own woodland.

Upton Viva hosts the Upton House Horse trials, and first became aware of Eco Charger when we exhibited there in July 2019. Following a demonstration of the Pioneer II, the stud team soon agreed this was the perfect work tool for them, enabling them to power through their busy workday smoothly and quietly.

The Pioneer II quad bike (suitably chosen in racing green!) is used for all racing yard tasks, such as feeding the horses and pulling the arena graders, and is driven on average just over 15 miles per day, every single day. To top it off, it’s entirely powered by renewable energy on this estate’s own green grid! 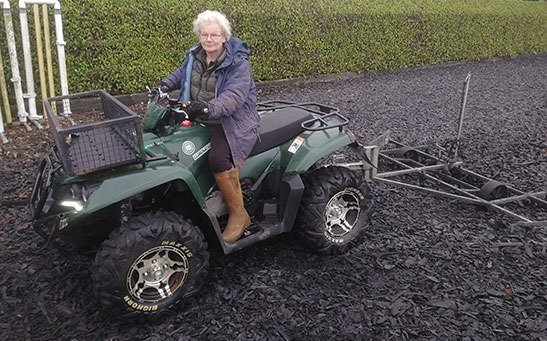 Stud manager Jayne Bushby remarks: ‘We have found the Eco Charger quad bike a valued piece of kit for the smooth running of our yards. In particular, with one of the wettest autumns, this bike has not let us down despite the copious amount of mud it goes through on a daily basis. We have used the bike for a number of jobs around the farm including fertilising paddocks, muck collecting etc., and are very pleased with how the bike operates.’

Robert Waley-Cohen adds: ‘As the Estate is determined to reduce its carbon footprint an electric quad bike is a good way to go as it can be charged on site, saves the time and cost of going in a vehicle to fetch cans of fuel from the local garage before tipping it into the fuel tank, and not doing this chore is better for the operatives’ health too. This is just an early stage for the Estate in going as all electric as possible and we are encouraged by our experience with the Eco Charger quad.’