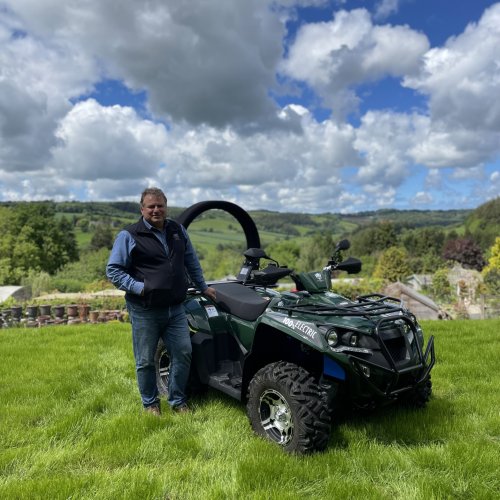 It’s all go for green

We recently featured in The Times newspaper - thank you to UK Export Finance (UKEF) and The Times for taking the time to speak to our Exec Chairman, Russell Crisp on how Eco Charger has gone from a family business based in Devon to a flourishing export business with the support of UKEF and HSBC.

After opening his farm for quad biking, Fred Chugg decided to electrify his fleet, and Eco Charger Quads was born. Now, with government support, the company exports globally.

The Chugg family have run their farm near Ilfracombe, Devon, since the 15th century. But after they lost livestock in the foot and mouth crisis of 2001, they diversified, turning the farm into a visitor attraction with horse riding and quad biking. With a keen interest in green energy and seeing the high cost of fuel for quad bikes, entrepreneurial farmer Fred Chugg decided to create an electric quad bike. In 2010, before many of us had heard of Elon Musk, Chugg took the chassis of one of his Yamaha quad bikes and put an electric motor into it. The next year he launched his first prototype – the Eco Charger E-ATV. More than a decade later, Eco Charger Quads is the go-to brand for quality, British-made electric ATVs.

“We’re best in class,” explains executive chairman Russell Crisp. “If people want a hardworking EV quad that can tow and tackle rough terrain, they come to us.”The firm now has a flourishing export business. International sales have grown from around 20 per cent of the business three years ago to two thirds today. “We manufacture in the UK and we ship to Australia, America, Europe and beyond through our dealerships,” Crisp says.

With the international side of the business taking off and wanting to increase production, the company internationalturned to its bank for help. “The only component we import is the frames for the bikes,” says Crisp. “We get them from a company in Taiwan and have done so for many years, but with rising demand, we needed a way to fund the purchase of a higher volume of frames.”

UK Export Finance (UKEF) was first introduced to Eco Charger by the Department for International Trade. A number of financing options were discussed between UKEF, HSBC UK and Eco Charger. Agreement was reached on HSBC UK creating a letter of credit for £100,000, with an 80 per cent guarantee from UKEF to meet the bill. More recently, Eco Charger has agreed a deal with a division of the Sabanci Group, which wants to exclusively distribute the EV in Turkey. HSBC was able to provide the group with an advance payment guarantee, again with support from UKEF.

“We’re ramping up operations and manufacturing in the UK and setting up more distribution hubs across the globe,” Crisp says. “None of this would be possible without UK Export Finance and HSBC.”