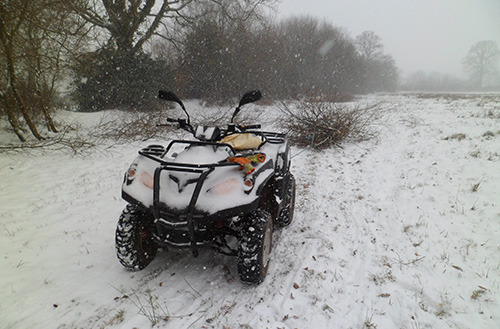 Among the many and varied roles that Eco Charger Quads find themselves performing – in terms of sheer variety and hard graft - working on a smallholding is certainly one of the more challenging!

Somerset based Smallholder Ian Jones has no hesitation in putting his second-hand Prime 2WD through its paces and singing its praises:

“Like many smallholders, we live this life to manage how we produce our food, knowing what goes in it, and also pursuing greener ways to live and to work the land. In our case, an approach that includes rainwater harvesting, installing a PV solar array and importantly investing in an all-electric 2WD Quad Bike.

We have 14 acres to manage and use our Quad for towing trailers, dragging a chain harrow and roller, and towing multiple bulk bags of hedge clippings across the fields to burn. Like most eco choices, it is more expensive than the fossil fuel alternative, but we know we are contributing to its electricity consumption from our own PVs - keeping emissions to an absolute minimum! 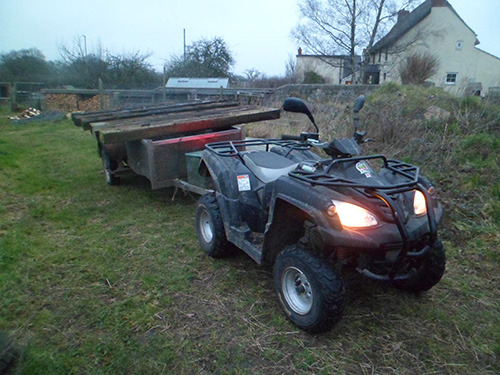 It also enjoys some great advantages over a petrol or diesel power plant - it’s quiet, allowing me to work alongside my neighbour’s house without disturbing sleeping children and when stopped, there is no engine idling noise, nor any fumes when either running or stopped.

We not only use it to tow, but when finishing off jobs in the dark, it acts as a lighting unit for which its batteries have a massive capacity. Yes – it does run out of charge, especially when dragging chain harrows with all the resistance they offer – we do about half of a 3-acre field and then charge again, but this has never been a problem. We then roll the entire field with only a partial charge used.

Another advantage over petrol is that there is no fuel to have to buy in and store. As a Quad operator, you also know that when you turn the key, as long as you have charge in the batteries, it will always go – no matter how long it is since you last used it – no nervous moments as the engine turns over and tries to fire up, as in the case of a petrol quad.

Compared to a petrol engine, the number of moving parts in an electric motor can be counted on one hand – all helping reliability.

For us it has certainly proved itself as a hardworking, all weather workhorse – not a toy but the real thing!

‘The only thing I can’t do is warm my hands on the exhaust on a cold day!” – Ian Jones